Kadhi is a very popular yet delicious dish of Punjab. It is a blend of yogurt and besan (gram flour) with besan dumplings. 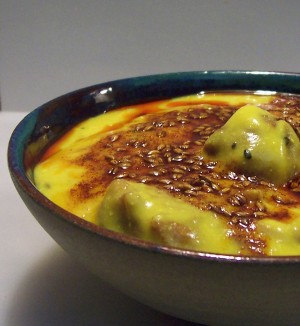 Take 2 cups of baisan in a large bowl.
Add salt, 1 tea spoon of chilli powder, chopped coriander, 2 chopped green
chillies, 1 tea spoon baking soda and one chopped onion.
Put at least 2 cups of water to make a smooth paste.
Keep it on a side for about half an hour.
Then take some oil in wok, when the oil is hot put baisan mixture one by one
using tea spoon.
Fry dumpling until golden brown.

Put one cup of gram flour, salt, heeng powder, red chilli powder, coriander
powder and turmeric powder into the yoghurt.
Mix them with the beater.
Make sure they are no lumps. (to avoid the lumps blend them with the Elec.
blender)
Take one cup of oil in a large sauce pan and heated it.
Then add all the seed stuffs into the oil.
After few seconds, pour the yoghurt mixture with 5 cups of water in the pan.
Stir it continuously with the spoon, until it starts boiling.
Cook this mixture for about 30 minutes.
Later put the baisan dumplings in this mixture and cover it.
Cook it for another 10 minutes.
Finally, take chopped onion and curry leaves and fry them with 1 table spoon
oil for one minute.
Then temper them on yoghurt mixture.
Serve it hot. With steam rice or corn bread.